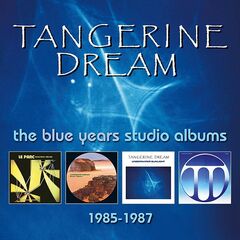 A NEWLY RE-MASTERED 4 CD CLAMSHELL BOXED SET FEATURING THE FOUR STUDIO ALBUMS BY TANGERINE DREAM RELEASED BETWEEN 1985 – 1987. CDs OF EACH ALBUM IN REPLICA WALLETS, INCLUDES POSTER. Esoteric Recordings’ Reactive label is pleased to announce the release of a newly re-mastered 4 CD clamshell boxed set which gathers together the first four legendary albums by Tangerine Dream, originally released on the Jive Electro label between 1985 and 1987, known by fans as “The Blue Years” albums.”Le Parc” was the first studio album by Tangerine Dream following their departure from Virgin Records. Edgar Froese, Chris Franke & Johannes Schmoelling recorded this inspiring work in Vienna, Berlin and London, utilising the services of guest vocalists Clare Torry on ‘Yellowstone Park’ and Katja Brauneis on ‘Zen Garden’. The album’s title track, subtitled ‘L.A. Streethawk’, was a reworking of Tangerine Dream’s theme to the US TV series Streethawk.”Green Desert” took over two decades from its initial recording sessions to completion. The project began life in August 1973 at a session in skyline studio in berlin. Locked away in Edgar Froese’s personal archive for many years, in 1984 the recordings were re-visited with additional recordings by Edgar being added at Eastgate studio in Vienna, finally appearing in 1986. “Underwater Sunlight” was released in 1986. Rightly heralded as an ambient classic, the album was the first to feature Paul Haslinger and was arguably the finest of the band’s so called “blue years”, influencing a new generation of ambient musicians. Featuring both parts of the superb ‘Song of the Whale’ and the classic title track, the album introduced Tangerine Dream to a new audience.”Tyger” was recorded in Berlin and Vienna and was the final studio release by the band for the Jive Electro label, taking its inspiration from the poems of William Blake.
Download Links:
CD1: